The Olympic cyclists have spent this weekend racing on my local roads. It's been rather odd seeing roads that I cycle commute on (although only when I'm taking a detour due to deep snow or a quest for post-work BEER) shown on international TV and lined with cheering spectators. 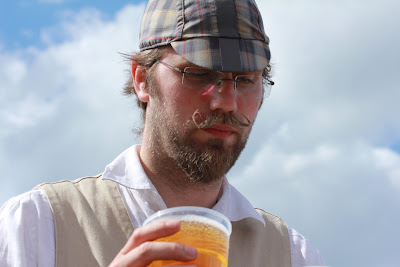 On Saturday we headed down to Denbies' Vineyard where there was a cycling festival, beer, wine, and a big-screen TV. Also, a lot of sun. We watched the race on the TV, and rushed down to the road to cheer the cyclists past, before returning to the TV and beer.


Today, the weather made Denbies' less appealing, so we stayed at home watching TV, and ran down to the High Street at the crucial point.

The attitude of some local businesses has been a bit odd - my yoga studio (which does a "yoga for cyclists" class) has shut for the weekend, despite not even being on the Road Race route, saying that they don't think people will be able to get to the studio. Other shops (such as the mini supermarket) have opened extra late to deal with the increased and erratic demand. The pet shop next-door to the supermarket was unusually shut today. The bike shop was unusually open, and had a big screen TV inside (plus all the computer terminals on the tills were streaming iPlayer) showing the cycling. Most cashpoints in Dorking were empty yesterday, and the Penny Black seemed to have run out of beer. The Thai restaurant was serving beer from the Duke's Head next door. So it's all a bit odd with the way that business-owners seem to have not anticipated that ten thousand or so people coming to Surrey might want to spend money. Or maybe people just wanted the day off to watch the Beach Volleyball.

Edit: I've just heard that Lizzie Armitstead lost her "lucky Oakleys" on the ride (due to the rain) and would like them back. I'll keep my eyes open, though if she got a silver medal without them, she can't need them too much!
Posted by Kathy at 6:29 PM