So. My friend Mrs S is (a) a very good cook, and (b) an (grammer!) professional historian. So, given an excuse to cook something esoteric and authentic, she will. And what better excuse for that than the fact that the weekend just passed would have been Easter, were it not for that wretched Papal Bull issued by Pope Gregory XIII. And thus it was declared that there would be a Mediaeval Easter Feast!

There were many preparations. Although Fancy Dress was not compulsory (indeed, the last Mediaeval Feast which was hosted by the S's, Mr P turned up wearing a long scarf, a wide-brimmed hat, and proffering jelly babies), I decided to make an effort. When I was informed that there was a garment called the Gates of Hell surcote (so named because of its wide armholes, revealing the shape of the woman's dress underneath her other dress - shameless!), it was clear what I had to make!

I didn't think it came out too badly, despite some damn fool casting himself into the Thames whilst I was trying to sew with the TV on, and distracting me enough to do a wonky seam.

Costumes aside, there were a lot of other preparations to be made. Those familiar with mediaeval dining arrangements will appreciate that the tableware had to be baked:

Mrs S spent many days (weeks!) beforehand preparing things. The aim was the replication of a royal feast recorded in 1390, and the recipes required translation, research and experimentation (they pre-dated the invention of measuring ingredients, or spelling). We arrived to help on the Friday (orthodox Good Friday) evening and Saturday morning. I foolishly looked at the recipes for the herb sauces, and pointed out that crushing plant material with a pestle-and-mortar releases very different flavours to those produced by shopping herbs in a food processor, and was promptly handed a pestle-and-mortar and half a herb garden.

Parsley and mint was manageable, but sage was somewhat tough! 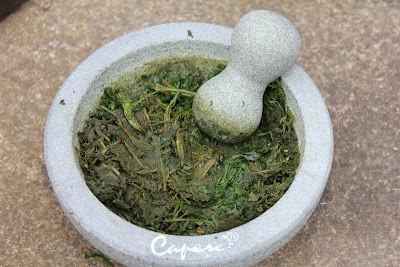 In the end, we cheated and employed a Mechanical Minion (aka "food processor") on the sage. In the meantime, other preparations continued apace. Pork and poultry were smoked on an applewood fire: 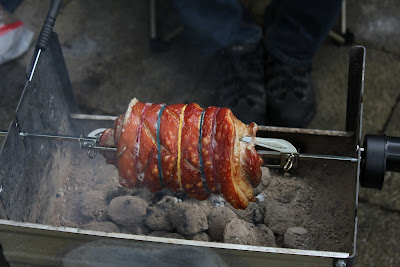 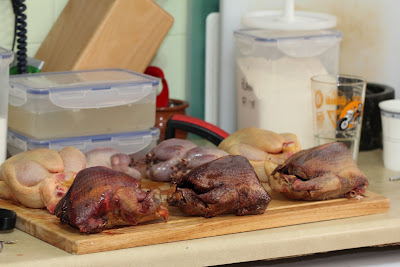 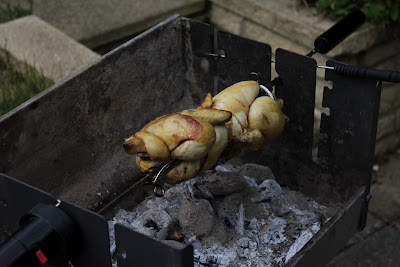 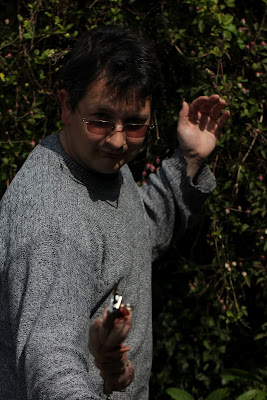 Almonds were threaded onto skewers by means of a traditional Mediaeval Method which involved an electric drill: 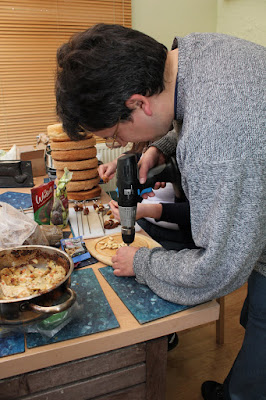 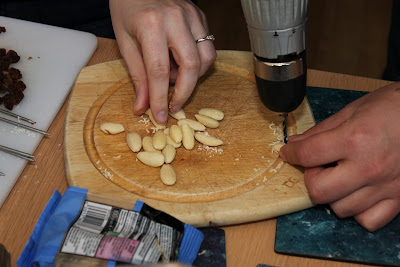 Food was set in readiness, and it was time to prepare for the Feast! 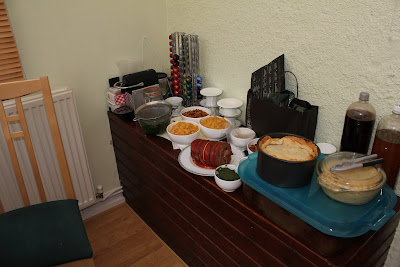