Day Fourteen – The End of the Tale

And that, as they say, is that. It chucked it down with rain the night we got back from Lokobe Reserve.

The next day we got up early and headed to Tana. We followed the repeated exhortations from the guide books, our guides, and the hotel staff, and prepared to look around the town. As per advice, we locked SD cards and valuables in the hotel safe, hid spending money across a variety of pockets, and made sure we had a sacrificial wallet containing a feasible but not excessive amount of money to give up if we were mugged. Having considered all these aspects, we walked into the main street unacompanied by guides for the first time in our holiday. We felt very conspicuous and very white. Being vaguely surrounded by beggars and people trying to sell us three-foot-long carved wooden galleons (unfortunately I didn't know the Malagasy for "Are you mad? That will never fit in my suitcase!"), we moved through the throng. We had a brief look around the town centre which was a bit like Basildon but hotter, saw possible signs of the political situation (a lorry-load of youths distributing bread to some people, and causing consternation and panic amongst others), drank a lot of rum in the Cafe du Gare, spent another night in Tana Plaza, and headed back to the UK the next day. There was a while when we thought our holiday would involve an unscheduled day in Nairobi, but they held our connecting flight so that we were able to make it despite an eight-hour delay (Many thanks to the Dutch cycle tourists who translated airport announcments and found us free food in the interim). Sadly our luggage didn't get that flight, but it showed up eventually, smelling of vanilla and lemur pee. Much love to Auntie C for collecting us from the airport despite a stinking cold, but she was thankful not to be able to smell us at that point.
In summary, Madagascar is a lovely country, two weeks is not enough time to spend there, and I'm determined to go back. 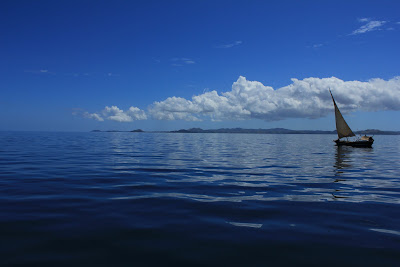