After a gentle day of loafing on the beach, splooshing in the sea, drinking reasonably-priced flamboyant cocktails in the bar (any drink which requires four cocktail sticks to keep all the slices of fruit and sprigs of flowers in the glass of rum is fine by me!) and giggling at the attempts of two Americans to translate the French menu, we were refreshed and ready for the next stage of our holiday.

We were met by Mohammed bright and early outside the beach-front bar. He introduced us to our fellow voyagers: the two Americans (Mark and Liz), and Gayle, a South-African whose luggage had elected to stay at home. He then proudly showed us his boat, the Salaama Tsara, moored in the bay. Now, as Mohammed explained, “Salaama” is a greeting, and “Tsara” means “beautiful”, so the boat name meant either “A beautiful “good morning”” or “Hello Gorgeous” – I didn’t quite understand which.

We were rowed out to the Salaama Tsara where we were introduced to our breakfast and the crew. There was Henri, the boat captain: a small wiry energetic man with a huge grin and a cat-like ability to switch instantly from utter lounging to extreme activity if occasion required. Denis, the second-in-command, or First Mate, or whatever the role’s called, was less chatty and inclined to sit contentedly at the blunt end of the boat. The cook, whose name may have been Aliana, or maybe Eileen, or possibly even Ariadne, was a lamba-clad goddess capable of producing vast platters of fresh fruit and even fresher seafood. Finally, there was Herman (or “’Erman-ii!” when anything was needed): the boat’s cabin boy, runner, gopher and clown. If the rudder was fouled or someone dropped something overboard, he was the one sent into the water to solve the problem, which he would do with puppyish enthusiasm and a cheerful nature.

We settled down to enjoy our bread and jam and coffee in the morning sunlight while the crew kicked the engine into spluttering life, threw fishing lines in the water, and set out across the bay. We were off!

Life on the Salama Tsara was simple and good. That first day set a pretty good precedent. We chugged southwest away from Nosy Be for a few hours, with a brief flurry of excitement when the crew caught a large fish called a “wahoo” (which Henri pronounced “ouaoo”) and a Spanish Mackerel.

We vahaza lounged in the sun for a bit, then in the shade, and then in the sun, whilst Aliana served snacks. After a few hours, it was time to see how well my fear-of-water-dwellers would cope, as we anchored off the coast of Nosy Ankozoberevina and found our snorkelling gear.

It turned out that I could cope reasonably well once I'd been informed that the little stingy things in the water wouldn't kill me TO DETH, and that there were no sharks on that coast of Madagascar, since the coral reefs kept them out (only now do I wonder how, if this was the case, the bay had become famous as a Whale Shark Spotting location). I decided not to push my luck too much by asking about sea snakes, and found that I was reasonably comfortable in the water as long as I was near someone. Preferably, with someone between me and a coral reef, and someone between me and the open ocean – the panicky part of my brain seemed content that way, on the logic that the others would be eaten first and I would be able to swim to safety whilst this was going on. In fact, I was so happy that when Mark found a five-foot-long Moray eel (which has the most evil expression of any species I've ever seen) I was able to look at it without screaming in fear and widdling myself silly!

Having headed back to the boat (thankfully missing the sand sharks which Gayle had spotted), we dried off in the sun a bit as the crew took us to Russian Bay. Our accommodation there turned out to be wooden A-frame bungalows on stilts perched on the side of a steep hill, and the crew's seemed to be a half-tumbledown hut under a mango tree.


The hut was just big enough for a mattress on the floor, and an elderly-looking mosquito net. We followed anti-malarial protocol and religiously checked the mosquito net for holes (“Found 'em! Now what?” “Dunno. Shall we go back to the beach?”) before going to investigate the dining area (a bench on the beach with a banana-leaf sunshade) and entertainments. The entertainments turned out to be a hammock, which defeated me With Hilarious Consequences, and a pair of kayaks. We took the kayaks out to explore the mangrove swamps adjacent to the beach, and Mark and Liz provided an impromptu display of synchronised swimming. 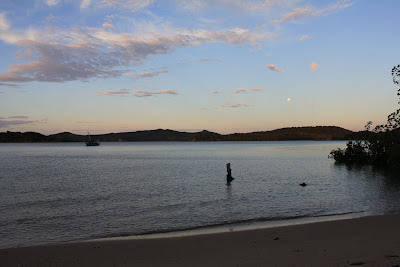