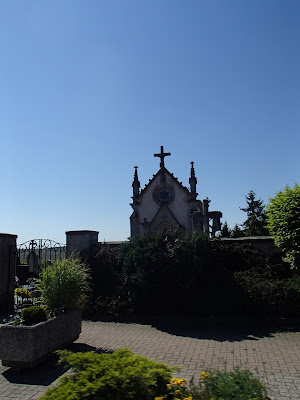 Owing to a need to visit the bike shop and purchase a new pump for our toolkit (and also replace the pump of our neighbour which we broke the previous day), we didn't get riding until ten-thirty, and the day was already getting quite warm.

The plan was to ride some 75km, so the 10% rule meant we figured we only had about 85km to do, mostly following the Maginot Line.

Unfortunately, by Sarralbe, Tim was really struggling with the heat and his Achilles. He declared a preference for the longer but flatter (and hopefully shadier) canal towpath, so we followed it down to Bissert and then cut across to Sarre-Union. Still struggling with the heat (it was 29C, according to one pharmacy we passed), some drastic re-routing was planned. Rather than take the more direct route into Saverne, we decided to follow the river valleys from Drulingen and Bust around and enter Saverne from the North-East.

The road down from Bust was one of the prettiest we rode all week - a deep ravine with a burbling river and troll-haunted forests. I took no photos, since we were riding (downhill) at a fast pace and on a new tyre whose traction-limits we didn't yet know.

After a brief getting-lost on the road into Saverne and doing a section of hard-shoulder on a dual carriageway, we eventually found the town centre, removed debris from the rear tyre and blessed its strength, and found the campsite (plus a bottle of Beaujolais).