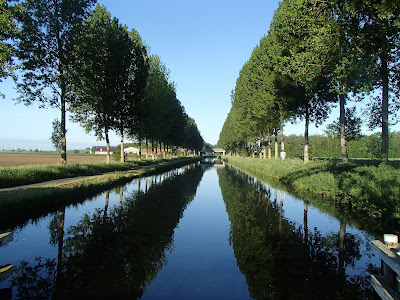 Rather than learn the French for "Git orf moi larnd!" we decamped early and followed the towpath, watching the hares and herons basking in the early morning sun. Rolling in to Tournai, the cobbled streets in conjunction with our badly-battered back wheel were a test on my nerves, so we found a cafe full of beer-swigging Belgians (it was eight thirty in the morning) for a refreshing stop (and a toilet).


The rest of the day was relatively uneventful, with a decent mileage covered by the time we had lunch in Quaregnon. Looking forwards to a shower, we continued across countryside that grew increasingly hilly and covered in wind turbines (all facing the same way as us, which meant that the wind wasn't).

There were three problems with the campsite that night. The first was that it was just across the border back into France, and the road crossing the border was clearly disputed territory, with neither country wanting the responsibility of maintaining it. Consequently, about 3km short of the campsite, we punctured on a pothole, and had to spend some time fixing the deflation.

The second problem was that the campsite wasn't where the map said it would be. Fortunately we spotted a sign in the centre of town which led us eventually to the campsite, so disaster was averted.

The third problem was when we checked in to the campsite. The manager said something to me in French which I understood all too well but insisted she repeat in English in the hope that she would tell me something different. She handed me a piece of paper with the translation on: Unfortunately the campsite had no hot water, and the shower block was closed. They had only cold water.

Not really having any alternative, we checked in anyway, designated one travel towel as the "flannel" and had a most refreshing sponge-down in cold water, before sluicing the worst of the road grime off our cycle clothes and drinking several beers and wine.

Planned route here. Though I think we managed to cover some 98km that day.
Posted by Kathy at 5:46 PM