The next day we declared that nothing would go wrong. We left the campsite (me with a slight hangover due to the previous evening's beer-and-wine) and promptly followed the map down a bumpy unmade track. Using the direction of the rising sun (and also a compass) we aimed for the nearest big road (the N40), considered the fact that we kept getting lost with the route sheet and that our map didn't cover all of the next 30km, and decided to follow the N40 all the way to Beaumont, Philippeville and Givet.

It was a pretty dull road, with a bit of a headwind. Any time a big lorry came up behind us, we would gain about 5km/h, surfing their slipstream, but we were ground to a halt by any lorries which came towards us.

Stopping for lunch in Givet, we were briefly informed by a ZZ-Top-resembling passer-by that he liked English people and that he had been to the UK once, for a metal festival, where he had seen Whitesnake, and a host of other bands I can't remember. We made polite conversation, his doggy defecated near the tandem, and he walked on.

We then tried to pick up the route sheet heading out of Givet towards the campsite. This was the point where we encountered the comedy gates to a cycle path which had been designed by someone who had clearly never seen a bike with panniers attached. Having overcome this obstacle, plus a man painting the narrow cycle bridge, we came to an unmade track signposted "VTT" (French for "MTB"). Deciding that we had had enough of this for a game of soldiers, we went back to the N95, which we followed all the way to Bievre. 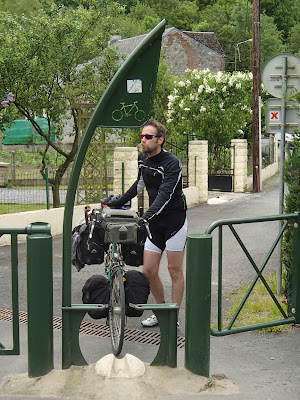 The Bievre campsite was perfect in every way: it existed, it was where it was supposed to be, and it had hot water! When the multilingual Dutch woman who ran the campsite asked if we wanted a shower (3€ extra), and we said that the last shower we'd seen was in the UK, she said "Yes, I can tell. Please shower!"

Planned route here, though as explained, we largely ignored the plan. It was meant to be 113km, but I think we did something in the order of 120km.
Posted by Kathy at 4:17 PM