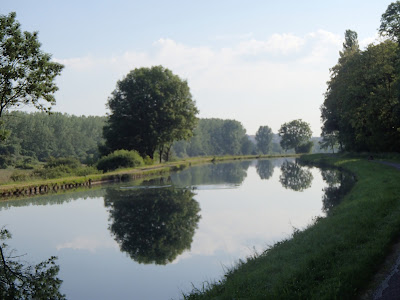 In view of the weather, which was set to be hot again, we set off early to avoid the heat. Instead of following the planned route, we followed the canal east and then south to Strasbourg. The journey was flat, and, apart from a couple of well-signed detours onto large and slightly grim roads due to major roadworks, uneventful. 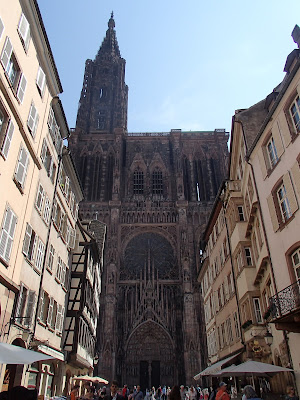 We stopped in Strasbourg for a cup of coffee. Strasbourg was full of young happy smiling people of all races and creeds living in harmony. It was sickening. However, things improved somewhat as we passed the cathedral and heard a band of buskers playing the cultured strains of Y Viva España.

As with all big cities, we had to resort to the compass to escape in the correct direction. We found a cycle-lane-sign pointing towards Kehl, which seemed useful, so we followed it until we crossed the Rhine.* Once in Kehl, we found a wonderful map which showed a main cycle route heading directly to our destination, so we followed signs to Offenburg and Gengenbach.

Now, if you've never cycled in Germany, I thoroughly recommend it. Their cycle paths are entirely unlike anything I've ever encountered: well signed, smooth, and at each side-road the bicycles have priority. Not only that, but every single kerb bump-down has been smoothed so that there is no more than a millimetre's step to worry about. Oh, and segregation? Someone said "Segregated cycle lanes? What a great idea! Let's segregate all the cars and put them on the grotty by-pass roads and leave the pretty (and flat and direct) routes for bike and pedestrians!"

We followed the bike lanes along a canal, and only had one navigational issue at an offset six-way junction where none of the villages listed were on our map. Fortunately, a helpful German stopped to assist us. Unfortunately, Tim and I don't speak a word of German, but were gratified to learn that it is entirely possible to understand (if not speak) the language due to War Movies.** The kindly German asked where we were going, tried not to giggle at our mangled place-name pronunciation, and then said (in German) "But... that's fifteen kilometres away!"

We assured him that we did indeed want to cycle such an heroic distance, and he gave us directions. We said "Danke", and toddled our merry way up the valley, eyeing the large anvil-shaped clouds which were beginning to build up.


We raced the rainclouds up the valley. Every time we stopped for a junction-check (Tim was having to concentrate so hard on the road surface so's not to bump the fragile rear wheel that we usually only saw road-signs when they went past me) we would feel a few drops of rain, but we left them behind as soon as we started cycling again, and got to our hotel fifteen minutes before the downpour began.


*It is possible that there was a cyclists-only bridge a few hundred yards upstream, but once the main Strasbourg-Kehl bridge was in sight, we aimed for it and used the cycle lane on there.

**This means that our vocabulary consists of "Achtung!", "Schnell!", "Danke", "Zigaretten" and "Good Luck." None of which we thought prudent to use, apart from "danke".
Posted by Kathy at 8:01 PM