Good St Wencescescesceslas Square and beyond 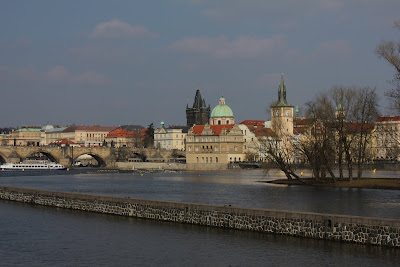 I have just realised that I failed to blog my last few photos of Prague. So here they are.

We examined St Wencescescesceslas Square, and admired the bullet holes left in the museum by some careless Russians. We then took a tram ("Ting! Ting! Ting! Went the bell!") south to look at the famous Dancing House, and agreed that it did indeed bear a striking resemblance to Fred and Ginger, provided that they had no arms, Ginger had no head, they had eight skinny legs between them, and were made of concrete and glass. 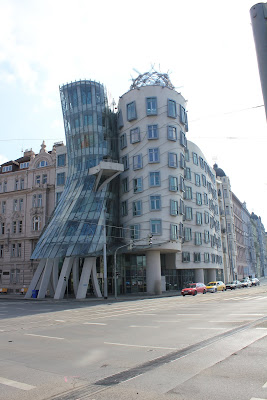 We has a picnic outside what was either an armadillo farm with artwork or a theatre (the money was on armadillos) and ambled back to our hotel via a route which included as many bridges as possible.

Then the epic Game of Transport commenced! It began with charades in a ticket office (public transport in Prague required one's luggage to also have a ticket. Mr S knew enough Czech to ask for the tickets we needed, but we didn't know the word for "suitcase" and every mime-and-point we tried resulted in a confused Czech woman offering us a carrier bag with our tickets). It then continued with a metro, a bus, an aeroplane which flew over some ferries, a taxi and a private car. Add that to the tram earlier, and we believe we collected the set that day!

Email ThisBlogThis!Share to TwitterShare to FacebookShare to Pinterest
Labels: Me, Photography, Prague