For those whose historical knowledge is largely Hollywood-derived, you may be surprised to learn that there was a reasonably complex system of etiquette when dining during mediaeval times. Most people know that it was unthinkable to eat one's trencher (the wooden disc of bread which served as a plate). However, forks hadn't been invented, so one ate with the fingers of one's left hand, wiping them on a napkin placed on one's right shoulder. A prosperous household would provide spoons, but free men would have to bring their knife with them. Naturally, slaves would not be permitted to own a knife. 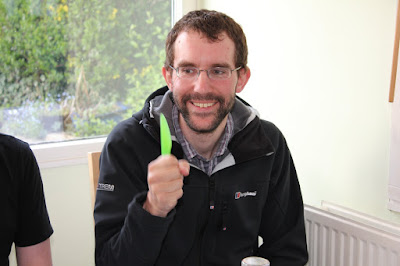 Food was not served in "courses" as we have now, but brought to the table in "removes" where sweet and savoury were mixed. A "two remove" meal, where the table was filled, the remainder removed, the table filled and removed and filled again, would equate to three table-loads of food. The more exotic and expensive dishes would be served in later removes, because the least-important people would be sent back to work after the first remove or two. Between removes, a "soteltie" - an elaborate pastry construct or something - would be brought out to demonstrate the skill of the chef. Butter was not usually employed in cooking, apart for dishes for the elderly and infirm. Saffron went in everything. And of course, a post-Lent feast should contain meat, and lots of it. With lard. And spiced wine. 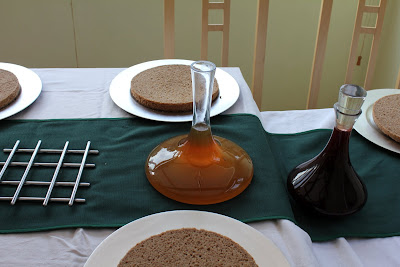 Since it was Easter, we sat down for a special pre-remove dish of "Calfe sodden and blessyd" (boiled and blessed veal) and "Soden egges with grene sauce" (boiled eggs in parsley, garlic, spice and vinegar sauce).

We then proceeded to fill the table with the first remove: 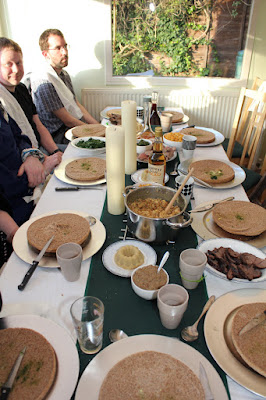 To give a break-down of the dishes:

I'm a fan of frumenty and split peas anyway, but the surprise hit on this remove was the pevorat. In Prague, we'd found the Czech equivalent of restaurant breadsticks to be sliced brown bread and a pot of salty lard with bacon bits. The pevorat had a similar flavour (lacking in bacon, but I'm tempted to add it should I ever make it myself). It was meant to be used as a sauce with the venison, but it went very well spread on bread, or as a vegetable. Lard is a vegetable, isn't it?

The leftovers were cleared, and the chef's first soteltie was brought in:

Then it was time for the second tableload of food: 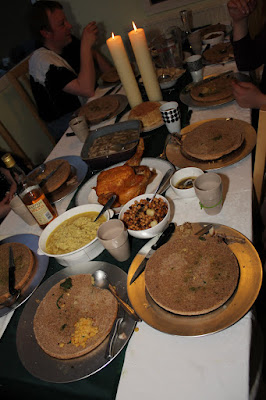 This consisted of the following:

The Mameny was a little bland, and the Vyuande cypre was insanely sweet, but the scrambled eggs were identified as an optimal hangover breakfast, and the ravioli was very modern (but if a recipe says "take minced pork and wrap it in thin leaves of dough and boil it", how else are you to interpret it?)

Once this was removed, it was time for the chef's next soteltie: 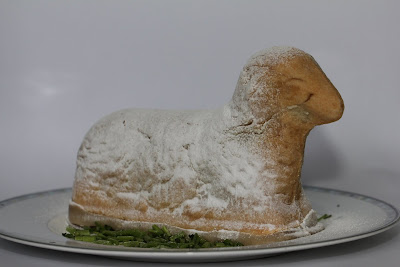 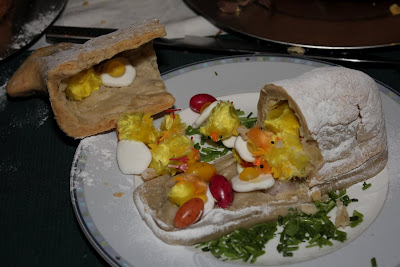 We had a brief respite from eating whilst we played the traditional mediaeval game of "Who can eat a Haribo Tangfastic and then drink a cup of sweet mead?". The answer was "most people" - possibly the saffron was providing a protective coating to our tongues.

After whetting our appetites, it was time to move on to the serious eating:

Having eaten this, and squabbled over the remaining hastelettes (oh, but they were good!), we retired to an adjacent room, admired the chef's next soteltie whilst eating confits and wafers and drinking pyment and hypocras, and felt a bit over-larded.


Many thanks to Mrs S for the copy of her notes so I didn't have to work out how to spell the foodstuffs myself, and for all her sacrifices in the kitchen.