Day Five – Adventure in Nosy Be!

The next day dawned dark and far too early. Owing to the vagaries of Air Madagascar and their shortage of airworthy planes, one has to phone the airport a couple of days before travelling to find out when the scheduled internal flight is actually going to be. Thus it was that our planned 11:40 flight to Nosy Be was actually due to take off at 05:20, which meant getting to the airport at 04:20, which meant getting up at 03:30. Which was Not Fun. Jean-Jacques drove us through the deserted streets of Tana, and we bade him a fond farewell at the airport, or as fond as it is possible to be at that hour of the morning.

We flew northwards to the island of Nosy Be, and landed at about seven in the morning. It’s a beautiful airport, but as we feared might happen, someone had blundered. The details of our rescheduled flight had not been adequately relayed to the person due to collect us from the airport, and we had no details for our accommodation that night (they were due to be weather-and-tide dependent). As we wondered what to do and fended off the over-enthusiastic offers of the local taxi-driving population (“Vous voudrez taxi?” “Non, merci, I’m waiting to be collected.” “Oh, Tropic Tours eh?” <reading over my shoulder> “You wan’ me phone them?”), the fastidious staff swept the airport clean and locked the doors, leaving us out in the taxi rank with no other means of transport. At this point, the man who had initially been most insistent with his offers of help, and who now was the only person remaining, waved a phone at us and said that he’d been in touch with our tour operator and would take us to their offices at no cost to us. In an unwise-in-retrospect move, (the word vahaza usually means “white-skin” or “foreigner”, but it can more sinisterly mean “moneybag” – there are places in the south of Madagascar where Europeans are warned against going), we agreed to go with him, being exhausted from our early start and having no other option. The car windscreen was reassuringly cracked, but as our driver and his friend drove us along bumpy roads where we kept encountering groups of youths carrying machetes, we began to realise that this may not have been a Good Idea.

We got to the shanty-huts on the outskirts of Hell-Ville, and one of the deserted tumbledown shacks was waved at and proclaimed to be the offices of our tour operator. I expressed Doubts. The driver shrugged, had a rapid conversation with his companion in Malagasy, and drove us to the centre of Hell-Ville where we halted outside a market. After a short wait, a car with flame decals and tinted windows pulled up, and a flashily-dressed man got out, patted our driver on the back and slipped him a hefty wodge of money. This unsettled me yet further. Tim furtively concealed our money about his person when no-one was looking.

At this point, I may have had a Strop. There may have also been a Pout, and mild-to-moderate Panic. I said that we wouldn’t go any further with anyone until we saw some documentation proving that people were actually who they said they were, since we weren’t in an official taxi and had no way of knowing that our current escorts weren’t a bunch of voleurs. Our driver looked hurt, and fished a smashed-up TAXI sign from the boot of his car and said “But it is a proper taxi! I’m not a robber – this is Nosy Be, not Tana! And besides, I know that your tour operator is Tropic Tours, so I must be genuine.”

“But I told you that I was looking for someone from Tropic Tours!”

There was an impasse, and a further lengthy Malagasy conversation, followed by multiple phonecalls.

“Mohammed is coming. He will sort things out.”

After about a ten minute wait outside the market, Mohammed showed up and was introduced as the owner of the boat.

“Have you got anything to prove who you are?” I asked with little optimism.

“No. Why should I need documentation? I know who I am! And besides, what are you doing here? My schedule says that I have to collect two English from the airport at 13:20, the Americans at 17:10, and another person later. Why did you decide to come early? I’m not due to collect you yet! Look: here’s my schedule! I need to be shopping for provisions for the boat, not here!”

This cheered me immeasurably: no-one this pissed-off with us could be trying to mug us. Mohammed gave us his phone number (not that this helped much, since our phones wouldn’t work without great expense in Madagascar), the boat name, the name of the hotel we would be staying in that night, and told us to go with the taxi-driver who was still sulking about my insult to his car.

The taxi-driver took us away from the town, along a very bumpy road, and delivered us to an elegant-looking selection of bungalows and apartments set amidst bougainvillea and mango trees. As porters carried our bags to our bungalow (which was bigger than our home), we surveyed the beach twenty yards from our veranda, and decided that if it was all part of a complicated plan to rob us and leave us dead in a ditch somewhere, we didn’t mind so much after all. 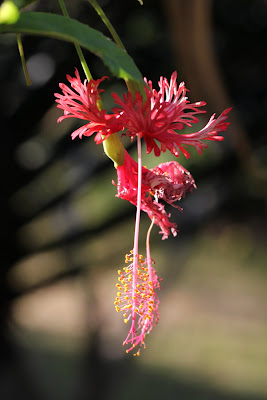