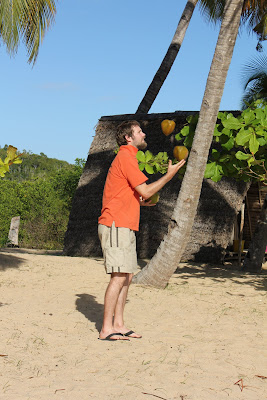 The next morning the beach around our hut was covered in snake-tracks. We also spotted a set of rat tracks converging with a snake track, a scuffle, and then just the snake tracks continuing. Poor rat. He must have come into our bed for sanctuary, and we turfed him out to his doom.
Having drunk enough coffee to feel vaguely awake, we decamped and headed for Nosy Tanikely, a marine reserve off the coast of Nosy Be. This was probably the most wildlife-rich set of reefs we found, though we were a bit annoyed by the thirty-strong group of Italians who were churning through the water, scaring all the fish and leaving the water cloudy and tasting of sunblock. I was being reasonably brave and exploring the reef, when suddenly a large lump of coral three feet long got up and swam towards me with an open mouth and lots of TEETH! I shot back to the boat and sat there gibbering for about five minutes, when Liz headed rapidly to the boat and scrambled aboard.

“Oh my gosh, there was this huge brown frikkin' ugly... with...TEETH!”

About five minutes after that, Mark swam casually back to the boat.

Despite Henri's assertion that it was a Rock Cod, and harmless, I didn't go back into the water. Not even when Tim came over to tell us of the turtles he'd been swimming with (he hadn't seen any TEETH). 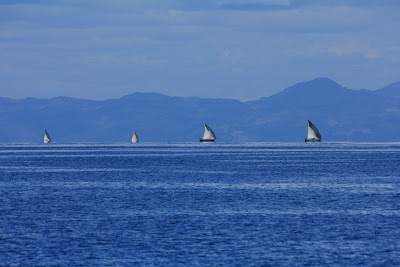 Once we'd finished with Nosy Tanikely, we headed for Lokobe Reserve, stopping off at Hell Ville for supplies on the way. Lokobe turned out to be a forest on the eastern coast of Nosy Be, overlooking Nosy Komba (of which more later). The accommodation here was not A-frame bungalows, but instead was pre-pitched tents under a leafy roof. With chickens.

As we were exploring the beach, watching the mudskippers frolicking in the surf and ignoring the tablecloth salespeople, there was a shout of “lemur!”and we rushed to see a female Maki investigating our tents in the hope of an unguarded banana.