Day Nine – The Nightlife of Mahalina 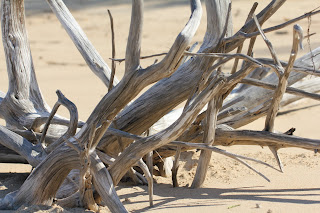 The next day was a relatively gentle day – not that we'd had much exertion since joining the Salaama Tsara. Denis and Henri took Tim, Mark, Liz and me for a morning snorkelling trip where we found lobsters (which we were unable to bring back for lunch, despite Henri's exhortions) and Tim found a stingray, but otherwise the reef there was fairly quiet. On the way back to Mahalina, there was a vast amount of fishing excitement as Henri hooked a Kingfish which took over forty minutes to land.

Mark and Tim were excited because this was EPIC fishing, and in the absence of Herman they got to have a go at steering the boat. The main reason for my excitement was because this would be something other than mackerel to eat (much as I love fresh fish, after three days of it, mackerel can become monotonous). It was only when I googled it later that day (yay for 3G Kindles!) that I discovered that the Kingfish is also a member of the mackerel family. Oh well! 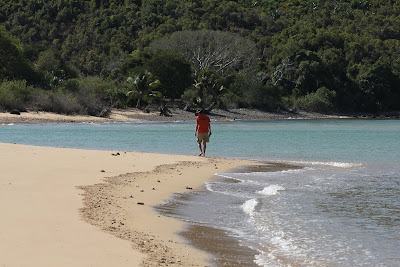 Back on the beach in Mahalina we sat around playing cribbage, drinking rum, and chatting. “Did anyone else see the snake spoor?” asked Gayle, whose hut was next to some scrubland.

“Snake spoor? I wouldn't have a clue what it looks like, but there's no reason to worry – there are no venomous snakes in Madagascar,” I replied.

The chatting continued, we drank rum, watched the moon rise, looked at the Milky Way, spotted fireflies, and Mark decided the only thing missing from his life was a cigarette. He'd noticed the crew smoking in the evening, so wandered over to ask if he could have a cigarette too.

“Hi guys, I was wondering about those cigarettes-”

Eventually, we headed for bed. In the middle of the night I woke up with a funny feeling in my foot as if someone had just tickled it. “Must have been a dream caused by the rum and the talk about snakes” I thought, before experiencing it again. I grabbed the torch just in time to see a small rat run away from me, but fail to escape due to the mosquito netting.

“Tim! Wake up! There's a rat somewhere in the bed and I need you to help evict it!”

Tim blearily gave the bed a search, and the rat was chased round and round inside the mosquito net in circles until we lost track of it. “I think it's gone” declared Tim, putting out his torch and going back to sleep. I spent the rest of the night in a somewhat wakeful state, turning the torch back on at every noise.